That’s right, in WIVLF,* we encourage folks to focus their holistic Fitness efforts around IV Pillars of Priority (or “PoPs”).

OK, keeping that well in mind, let’s now take a closer look at each of IV WIVLF PoPs in turn, shall we?!  And, once again, those IV PoPs are:

Let’s now take a quick introductory look at each of these PoPs, in turn: 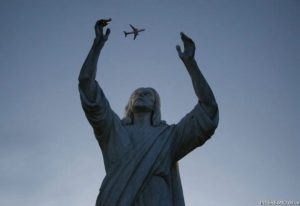 “A thief comes only to steal and slaughter and destroy;

I came so that they might have life and have it more abundantly.”[3]

“The fear of the Lord is the beginning of wisdom.”[4]

“[F]or whoever is begotten by God conquers the world.

And the victory that conquers the world is our faith.”  I John 5:4 (Emphasis added);

and see also John 16:33, wherein Jesus reassures us:  “I have told you this so that you might have peace in Me.

In the world you will have trouble, but take courage, I have conquered the world.”

Regardless of the historical epoch, irrespective of the cultural setting, deep within the heart of each and every man, woman, and child is the instinctive realization . . . that there has to be “something more,” “something greater.”  This realization then quite naturally leads us to a timeless and eternal search for this “something.”  And that, my friends, is essentially a spiritual quest.

Yes, sadly we cannot deny it:  Mankind’s slavish dedication to this or that “religious” practice, cult, or similar such thing down through the ages has resulted in an avalanche of tears and an ocean of spilt blood; but, whether considering the images of gods or deities painted by prehistoric man on the walls of caves, or the carving, painting, or sculpting of supposed gods or deities in whatever form down through the ages, it seems undeniably clear:

mankind has been on what a seemingly innate,

Of course, this quest has taken on a widely divergent and varied range of hues, shapes, and colors.  Whether worshiping the sun, the moon, the stars, fire, or bulls, or snakes, or by following the teachings of whatsoever sort of guru or prophet might crop onto the scene . . . or, perhaps more subtly but nonetheless undeniably, by “worshipping” the impressive physical Adonis or Aphrodite on our television set, the movie screen, the pages of a book or magazine, the latest computer app . . . or at the gym down the street . . . or even by worshipping one’s own self . . . all this yet again points to an inescapable, irrefutable fact:

Is it mere coincidence, for example, that even supposedly atheistic or Godless societies, such as the Communists, invariably fall into cults of personality, trying to make “gods” of mere mortals such as Marx or Lenin, of Stalin, Mao or Castro, Ceausescu or Tito, or of the Kim family dynasty?  Don’t such examples further validate or confirm that we humans are, in reality, spiritual beings in physical bodies?  We long to create a spiritual awareness or sensibility, even trying to make gods of proclaimed atheists, again such as with Karl Marx, who said, “Religion is the opium of the people.”  Quote by Karl Marx found in and taken from https://www.marxists.org/archive/marx/works/1843/critique-hpr/intro.htm, [accessed 29 May 2018].

And, in this, as in so many things of course, Karl Marx was dead wrong.

So, man is a spiritual being – in a physical body.  While we are imbued with an immortal soul, we live out our lives, we live and die in the physical sense – as well as the spiritual, intellectual, psychological, and emotional.  Thus, it follows that we should do our utmost to prudently and conscientiously care for not only our spiritual well-being . . . but our physical, intellectual, psychological, emotional as well.

“Do you not know that you are the temple of God,

and that the Spirit of God dwells in you?

If anyone destroys God’s temple,

God will destroy that person;

for the temple of God, which you are, is holy.”

And this business of integrating or conjoining the physical, the intellectual, the psychological, and the emotional . . . with the spiritual . . . that’s what WIVLF is all about!  It’s what sets WIVLF apart from the countless variety of physical fitness and weight loss programs out there on the market.  Oh yes, as we shall see, WIVLF is most certainly concerned with the physical part of “Fitness,” but only when integrated within or conjoined as part and parcel of a far more holistic approach . . . with the aim and objective of helping each aspiring practitioner:

Of course, we in no way pretend that we know all the challenges you, personally, might be facing in life.  Nor do we know your Goals, Interests, Aspirations, or Objectives (GIAOs).  Please don’t think we’ve deluded ourselves into thinking we “know it all.”

We most certainly don’t!  Nor are we, in WIVLF, trying to persuade you to change your own personal Faith or dramatically alter your existing lifestyle.  All that is completely up to you.

But what we do offer is encouragement . . . and inspiration . . . to ““Be All You Can Be!” (borrowing a durable Army recruiting slogan of yesteryear).

And that requires work on our part!  Yes!  Physical work too!  It requires us to sweat!  Indeed, that’s what God intends for us to do – even before the fall of man!  For, well prior to mankind’s fall from grace:

took the man and settled him in the Garden of Eden,

to cultivate and care for it.”

And, of course, after the fall, it became even more clear:

“By the sweat of your brow

you shall eat bread,

Until you return to the ground,

from which you were taken;

For you are dust,

and to dust you shall return”

Countless generations down through the ages and from around the globe – whether Christian or not – have recognized this reality; and, many different individuals and groups of individuals have tried to achieve something which, at first glance, might seem rather odd or strange, namely:

To tether Faith (PoP # I) or a belief in and dedication to Almighty God (or some other supposed spiritual entity or force) with the other III WIVLF PoPs is what we’re striving to achieve in WIVLF, namely:  The similarly seemingly instinctive bonds of love, longing, and devotion related to Family (PoP # II) . . . and then also tossing in or integrating an appreciation of physical Fitness (i.e., health, vigor, courage, vibrancy, and vitality) (PoP  # III) . . . as lived out and applied in a life of service and virtue . . . regardless of the of Field of endeavor (PoP # IV).  Perhaps not too surprisingly to some, this oftentimes touches upon or at least somewhat interrelates with something which might seem completely absurd or equally strange to others, namely, an appreciation for or service in the military or martial training as well.

So, while we are most certainly in no way trying to introduce or propose a new concept of Faith – for sure – but, rather, what I do believe the Lord has placed on my heart and mind is something I must keep working at, no matter the circumstances; and in working at it, I believe I am also meant to share this something with others.  And this “something” is an idea or concept I like to call . . . drum roll here:

Yet, in all good conscience, we cannot neglect to mention:  With Jesus, there is no “half-stepping.”  As C.S. Lewis so artfully put it:  Either Jesus was who He said He was, or He is the greatest fraud, the greatest liar in all of history . . . or He was crazy.  Jesus is either “liar, lunatic, or Lord!”  Quote found in and taken from http://www.goodreads.com/quotes/754731-jesus-christ-was-either-a-liar-a-lunatic-or-he and http://www.kevinhalloran.net/c-s-lewis-quote-on-jesus-as-liar-lunatic-or-Lord/, [both websites accessed 12 November 2017.

For Jesus boldly and unequivocally proclaimed:

“I am the way and the truth* and the life.

No one comes to the Father except through Me.”

The answer to each of these questions is unequivocally and unreservedly:  “NO!!!”  No one . . . but Jesus!  Indeed, no one can do these sorts of things unless they are truly Divine, unless they can tap directly into the full power and authority of Almighty God, as Jesus did.  For Jesus was, you see, God become Man!  The Second Figure of the Holy Trinity!  The Only Begotten Son of God!!!

And, despite all of the heated and hateful schemes down through the centuries – and especially of late – to disparage or dethrone Jesus from His rightful place, has there ever been any credible evidence of fraud or even the slightest hint of scandal concerning Jesus?  Has anyone – to include His most strident and virulent enemies – ever produced a single scrap of evidence to show that Jesus was a lecher, a self-absorbed greedy swindler, a sham, a fraud?

Again, the answer to each question rings out loud and clear:  “No!!!”  From the beginning of His ministry right up to the point where He forgave His enemies while dying on The Holy Cross, never has there been a more perfect embodiment of all the most highly esteemed virtues than Jesus!

In the final analysis then, I am obliged to testify:  Not only was He Lord and Savior for all of fallen humanity throughout the entire course of history, Jesus also provides us with the very best of all possible role models, for, once again, never has there been a more perfect embodiment of all the most highly esteemed virtues than He!  By His compassion toward the sick, the despondent, the rejected, and the grieving . . . and to truly penitent sinners of all stripes . . . by His steadfast devotion and unswerving dedication to duty, by His indomitable courage in the most horrific of circumstances, by His unbridled and undiminished Faith (FTH) in and devotion to His Great Commander, His Heavenly Father, as well as by His unbounded love for His fellow man, by His humble acceptance of His assigned duty and by His most unswerving perseverance in seeing it fulfilled . . . in the face of the most desperate and seemingly hopeless of circumstances . . . can anyone honestly or seriously contest this statement:

He was and will forever remain, Without Question,

A True “Warrior” if There Ever Was One,

A Warrior Not of Destruction . . .

But regardless of your own personal Faith background or spiritual tradition, please rest assured of this:  You will be most certainly welcomed with open heart and open arms WIVLF!  Anyone and everyone, regardless of spiritual belief or religious tradition, irrespective of cultural setting, or present health or fitness condition can benefit from WIVLF!